In the previous article we have been talking about a phenomenon of the modern days. Despite the technological progress, people are now spending more time on a flight than they used to. A perfect example for this tendency is the flight from London to Edinburgh. Today, a passenger will spend 1 hour 25 minutes on board the plane while in 1995, the same flight lasted ten minutes less. This means if you have a feeling the flights have become longer these days, this is not just an illusion. This really happens.

This article will provide you more details on the reasons causing such changes in the time of the flight.

If you have been a car driver for a couple of years, in all likelihood, you have noticed the way the prices for fuel are growing. this is true not only for the fuel used by passenger cars. Certainly, the fuel designed for airplanes is becoming more expensive as well.

In fact, the prices for this type of fuel have skyrocketed during the last decades. Just imagine the gallon of airplane fuel being available for the price of 70 cents in 2002 and, in ten years, reaching the price of 3 dollars. This is a gigantic difference.

Now, consider the amount of fuel required by an average passenger plane even for a short flight. This is a way greater than the amount of fuel used by an automobile. In fact, extending the time of a flight allows airline companies to save millions of dollars a year.

Providing you do not have any driving experience, you might be wondering why a longer flight allows companies to save more money. This is possible because travelling at a constant speed regardless of the type of a vehicle takes less fuel. Acceleration usually requires more fuel which certainly costs more as well.

It is not a secret the technology is being constantly developed, so passenger airplanes are being improved as well. Yet, the time of travelling is extending since the number of planes is a way greater than it used to be. For this reason, the previous schedules are not working anymore and airline companies have to do a lot to manage the traffic.

You might not know the meaning of a popular aviation term Schedule Padding. This technical word stays for extending of the margin for flight time which is important for managing the flight time regarding the delays. This practice includes adding extra time to the entire time during the entire flight as well as some additional time when the flight starts and ends.

In such a way, pilots can make up time during the flight even though the plane has been delayed for a quite a long time. 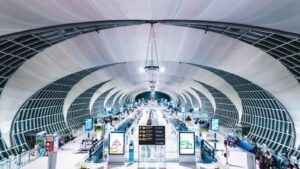